How to tell which foods will make you fat! Know your Glycemic Index numbers!

So I was talking with a couple guys today and it kind of dawned on me that there needs to be a more in-depth conversation on carbs with you.  We all know how I feel about carbs, and for more information you can view my previous blog (if you haven't I recommend you do before reading this, but you won't have to. But today let's explain it a little bit further, and better yet, let's start looking at food in this way so we ensure a healthy diet, great healthy weight loss and lean muscle gains!

Before we start! I do not go completely carb free.  This is one huge mistake people can make.  Yes it is true that it does  lead to quicker weight loss, but you will also put weigh back on quickly when you start eating carbs again (one major pitfall of the atkins diet).  This can lead to yo-yo dieting and much less safe alternative.  I often recommend low carb diets that incorporate slow carbs with low GI numbers.  You can have carb free days, but there are some days you need slow carbs to be incorporated  ESPECIALLY if you don't take a cheat meal.

I will quickly give you the summary of carbs.  Unlike what you might think, fat rarely makes you fat, but it is rather carbs that make people fat.  Carbs are things like Bread, Pasta, Candy and sugars.  When you eat foods like this you put your body into fat storing mode and open up pathways for these nutrients to become love handles.  They do this by spiking your insulin levels which in turn activates a compound called GLUT 4 which is basically the guy holding the doorway to tubby town.  Take note, carbs are drastically different in terms of quality.  Many foods are given a Glycemic Index (GI) number, and this will essentially rank food as a bad carb.  It's simple, A bad carb will have a high GI number and load.  A healthier carb will have a low GI number and load.Keep in mind these are easy small changes from things like white rice to brown rice that can drastically increase your weight loss.  Not to mention that low GI foods make you feel full longer, and you will eat less! 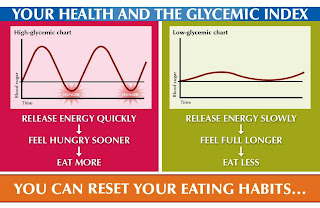 Below you will find a chart provided by Harvard that works great for evaluating foods!  If you see foods that aren't here try googling them, product's GI numbers are relatively easy to find for almost any food!  Thanks Harvard!


Note: white bread (~ 70) is known for being fairly awful.  Aim for foods with at least a lower GI number than this with the ideal being around 50 or less.  Take notice also of nuts and beans being awesome carb sources for diets (~30)
Dates Won't Raise Blood Sugar  (GI score of (~50)

One of the main reasons people avoid eating dates is the belief that they will raise their blood sugar levels, but studies have shown that belief to be erroneous. The May 28, 2011, issue of "Nutrition Journal" reports a study in which date consumption was tested on diabetics. The study shows that while dates contain high amounts of natural sugars, they are actually a low-glycemic index food and did not significantly raise blood sugar levels after they were eaten. If you are diabetic, speak to your doctor before adding dates to your diet so that you can monitor your blood sugar levels and determine how dates affect you personally.


*For anyone dealing with blood sugar issues or is a diabetic, you should always consult your doctor before adjusting your carbohydrate levels.

When you eat a big meal—which is loaded with simple carbohydrates, i.e. pasta, white rice, bread, potatoes—it sends your blood sugar soaring. The body immediately releases a hormone (insulin) whose job it is to move the sugar out of the bloodstream where—if it were to stay elevated it would do serious damage.

Insulin escorts sugar into the cells. When the muscle cells don’t need it, it goes into the fat cells. No wonder insulin is also known as the “fat-storing hormone.”
Insulin does its work with the help of an enzyme called lipoprotein lipase (LPL), which is the “fat-storing enzyme.” LPL takes triglycerides from the bloodstream, divides them into smaller parts (called fatty acids), and then promptly helps store these fatty acids in your fat cells.

If insulin remains in the bloodstream, it effectively locks the doors to the fat cells. They won’t open up and you won’t burn fat) until insulin levels come back down. Of course, the more you continue to eat that same high refined-carb diet, the less your insulin levels go down.
How do you burn fat?
Insulin has a sister hormone, and its name is glucagon and it’s a critical component of your fat-burning biochemistry.

When you need more energy and food isn’t available, glucagon is secreted. Its purpose is the exact opposite of insulin’s. Glucagon goes into the cells and causes fat to be released. And it does so with the help of a fat-burning enzyme called hormone-sensitive lipase (HSL).

Much like glucagon is the “opposite” of insulin, HSL is the “opposite” of LPL, the fat-storing enzyme we spoke of earlier. HSL breaks down triglycerides (the form of fat stored in your cells) into fatty acids and glycerol, so as they travel around the bloodstream they can be burned for energy or excreted. This glucagon-HSL axis is what I call the “fat-burning switch.”

Working backwards, we can see the obvious: Fat burning (and weight loss) won’t take place unless the fat-burning switch (glucagon/ HSL) is turned on. The fat-burning switch is in the “off” position as long as insulin levels are high. Insulin levels are high whenever blood sugar is high, and blood sugar is typically high in response to high-refined carbohydrate meals.

Hence the solution to the problem of how to burn fat is pretty simple. Keep blood sugar in a nice, moderate range where it won’t trigger excess insulin. By keeping blood sugar (and insulin) down, you allow glucagon/HSL—the fat-burning switch—to do its magic.

If you want to trigger your fat-burning switch, you have to learn to eat in a way that won’t trigger excess insulin. Fortunately, that isn’t that hard to do. Follow a natural foods plant based diet and make my sweet vegetable tea to help curb sugar cravings, it really is that simple.

Dates are the fruit of the date palm tree and are grown primarily in dry, arid regions, such as the Middle East and parts of California. Though dates are often used as an ingredient in sweets and other recipes, they offer several nutritional benefits when eaten fresh and pitted.

One of the main reasons people avoid eating dates is the belief that they will raise their blood sugar levels, but studies have shown that belief to be erroneous. The May 28, 2011, issue of "Nutrition Journal" reports a study in which date consumption was tested on diabetics. The study shows that while dates contain high amounts of natural sugars, they are actually a low-glycemic index food and did not significantly raise blood sugar levels after they were eaten. If you are diabetic, speak to your doctor before adding dates to your diet so that you can monitor your blood sugar levels and determine how dates affect you personally.

Dates are loaded with fiber. According to the USDA National Nutrient Database, just one pitted date contains 1.6 g of fiber, or 6 percent of the recommended daily intake. Fiber is known for its ability to help lower cholesterol and fight and prevent obesity, heart disease and colorectal cancer. The November 2008 issue of "Critical Reviews in Food Science and Nutrition" reports that the fiber in dates is primarily insoluble fiber, which binds to fat and cholesterol and carries it out of the body.

Though the fiber in dates has the ability to lower cholesterol levels, researchers at the Technion-Israel Institute of Technology in Israel report that dates have better results at lowering triglyceride levels, which is another type of fat in the blood. A study published in the Sept. 9, 2009, issue of the "Journal of Agricultural and Food Chemistry," shows that consuming dates may lower triglycerides by 8 to 15 percent. Reducing your triglyceride levels will lower your risk of hardening of the arteries, heart attack and stroke, according to the National Institutes of Health.

Adding dates to your diet delivers vitamins and minerals that are necessary to maintain optimum health. The primary vitamins in dates are the B vitamin family, with vitamin B-6 topping the list. The B vitamins help with the metabolism of food and the formation of new blood cells. Other vitamins include K and A. Dates are an excellent source or minerals, with potassium in the No. 1 spot. Copper, manganese, magnesium, calcium, phosphorous, iron and zinc complete the mineral profile. The body only needs small amounts of minerals, but if it is depleted of any one, it can be disastrous to your health. Snacking on dates can help you build up your body's mineral stores.

Dates are a good source of energy. Up to 80 percent of the date flesh is sugar that the body can easily access for energy. Fresh dates have a somewhat lower percentage of sugar because the contain more moisture than dried dates, and the sugar in dried dates is more concentrated, but fresh dates are still a good source of carbohydrates.

Dates are also a food source of fiber, according to Dr. Al-Farsi. For every 100 g of dates, approximately 8 g is fiber. Most of the fiber is of the insoluble type, meaning that its major health-promoting effect is to add bulk to stool and help food move through the intestinal tract.
Low Fat

Another health benefit of dates is that they are low fat. In 100 g of dates, only a fraction of a gram is saturated fats. Saturated fats can raise serum cholesterol and lead to blood vessel and heart disease, so eating foods low in these types of fats is part of a healthy diet.
‹ Go back to the blog